The Search for Benjamin’s Garden: A History Mystery 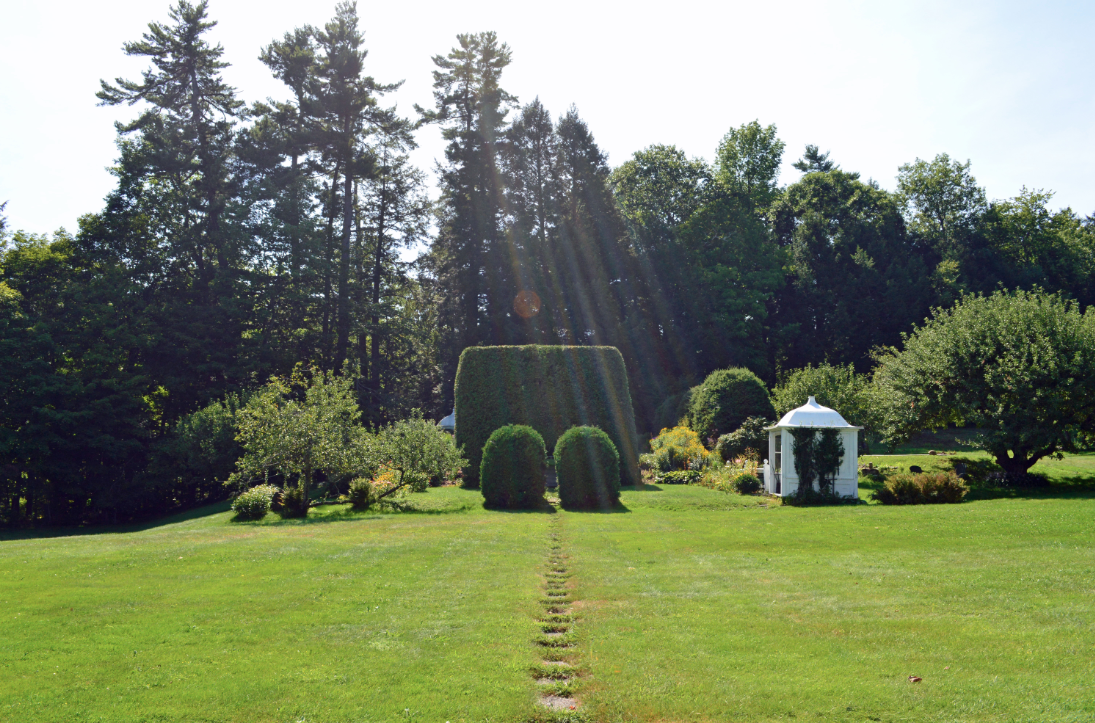 To enter the main garden at the Vaughan Homestead one must first stand with the 1794 house to one’s back, Benjamin Vaughan’s 200 year old Black Oxford apple tree to the left, and the 100 year old “sun house” gazebo to the right. Standing like this, one is faced with a passageway cut into a towering cedar hedge, framing a glimpse of what is to come. Upon passing through the hedge, the outside world is quieted and left behind, and one is immediately drawn across the green to the “summer house” gazebo.  Here visitors may sit in the shade with the wilderness at their backs and a panorama of blossoming flowers in the foreground. 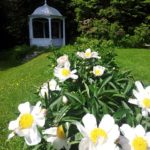 After reading Andrea Wulf’s book, “Founding Gardeners,” one might surmise that the garden, which literally stands as a formal doorway into the wild, drawing visitors to the imposing woods beyond, is a statement of the importance of the American Wilderness –  a common theme in the gardens of the founding fathers as described in Wulf’s book. Benjamin Vaughan, the Homestead’s first resident, was, after all, a contemporary who shared their passion for agriculture and botany, and who corresponded with all of the founding fathers. He even visited with Jefferson at Monticello, the site of the famed gardens, and exchanged seeds with him. It is hard to believe that Benjamin would not have been as intentional with his garden design and plantings as his contemporaries were. The problem with this line of thinking, however, is that records show that the current Homestead garden was established by Ellen Twisleton Vaughan, during a period of revitalization of the Homestead grounds sometime around 1900. So, we asked ourselves, how closely did she mimic the garden that existed during Benjamin’s time 100 years earlier – does it even stand in the same place? Did oral history give Ellen Twisleton some sense of what the garden once was? Did Benjamin keep records, as the founding fathers did, of what he planted, where he planted, and why he chose which species?

Here is what we know. In addition to a farm at the site of the current day Maple Hill Farm, Benjamin also planted crops and a garden at the Homestead itself. He also requested specifically that the current day stand of old growth pines bordering the garden not be cut. Alluded to in various publications and letters, the garden was extensive and known for its beauty and juxtaposition to the woods and wild ravine.  The current day garden’s unique design highlighting the Woods, Wulf’s book comparing garden design and political statements, and the lack of anything more in our records than passing references to the Homestead’s original garden piqued our curiosity, and thus began “The Search for Benjamin’s Garden.”

We began by investigating our catalogue of papers and articles as well as Vaughan family books, journals, and memoirs. This process revealed the following descriptions and answered some of our original questions:

. . . A more romantic spot is not often found than that on which stands the house of Mr. Vaughan . . . In the rear, as you recede from the river, lies a handsome garden, furnishing even at this time of year (Sept. 29) ample proofs of fertility of the soil. Behind the garden is a wild and solitary valley at the bottom of which runs a small mill-stream. A charming change from the cheer-fulness of the house, garden, and town, and the splendor of the river and its shores, is experienced in a moment. The first step out of the rear of the garden is into wildness, solitude and gloom. I kow not so handsome an appendage to any gentleman’s seat in this country.”

. . . He had a large garden of several acres tastily laid out, with broad paths and numerous valleys, whose borders were adorned with flowers or shaded with currant bushes, fruit trees and shrubbery. The whole was under the care of an English gardener. Every kind of vegetable was raised abundantly . . .  there may be many costly and more embellished [gardens], owned by millionaires, in the vicinity of our great cities; but this of Dr. Vaughan had one charm, seldom found elsewhere. It lay in the midst of a landscape of surpassing beauty. It rose gradually from the entrance gate near the house, until in ascending the walk you found yourself on the height of a declivity at the verge of a tall woods in a summer house; from this airy resting place there was a magnificent view of the village, distant hills, and the gentle waters of the Kennebec winding “at their own sweet will.” Near the spot were mowing fields, and pastures with cattle grazing and some shady oaks yet spared by the Goths in their clearings. Such was this picturesque place, when last I saw it in its glory, many years ago, when the the Dr. led me and the bride of my youth into his lovely garden to partake of flowers and fruits, ere that charming family and she too had gone – I trust to a more enduring Paradise. Behind the summer – house loomed up a steep mountain deeply wooded, and between them was a precipitous ravine or narrow glen through which a powerful stream rushed headlong from ledge to ledge, beneath a dark shadow of tall trees, until it leaped down like a miniature cataract and formed a pretty basin, where we sometimes caught a small trout or two. After descending from rock to rock the stream at last subsided into a pond, which supplied the large flour mill built by Mr. Charles Vaughan. This romantic waterfall was called the “Cascade,” accessible by a winding path down the steep, and its murmur could be heard from the summer-house in the stillness of the evening, where now the steam-whistle and locomotive echo through the valley below.

Exerpt, The Peabody Sisters of Salem, Louise L. Tharp
(Elizabeth & Mary Peabody lived at the Vaughan Homestead as governesses and teachers for a time.)

At first Mary lived at “Uncle Benjamin’s,” just as Elizabeth had done. Elizabeth enjoined her to read all the books she could; but Mary loved the gardens better, with their little white summer houses like miniature Greek temples, flower beds between. She liked to walk across the broad lawns and beyond, where the formal gardens gave way to woodland paths that clung to a high bank along a brook and ended where a “cascade” turned a gristmill. Dr. Vaughan, whose gardens were the pride of his heart, showed Mary his books on horticulture and botany which opened a new world to her.

In the two decades since [settling] Vaughan had built an enclave of manor houses and manicured gardens for himself and his children as they grew up and married . . . His own gracious white clapboard mansion, the Homestead, became the centerpiece of his plan to “live humbly, but in comfort and plently.” The house stood on a bluff avove the Kennebec, with a commanding view of the river. A smaller tributary, lined with towering pines, ran through a steep ravine behind the property, and a dramatically cascading waterfall could be reached by a short foot-path leading from the Homestead’s topiary garden.

We found this one weeks after the ones above:

A white picket fence extended from the great sycamore to the woods, the open space south of the fence being the flower garden and orchard combined . . . you must not confuse the garden that I have just spoken of with our present flower garden. That is the creation of my wife, inspired some forty odd years ago by a visit to the garden at Mount Vernon, from whose “Gazebo” she copied our summer house . . . she did no attempt to recreate the old garden, for that was very extensive, covering the whole of the space from the old picket fence to the great elms, with wide walks, still visible, between slightly raised bed of flowers, interspersed with apple and other fruit trees, as you may see in many an English garden today.

Here is a great find, discovered a month after this article was first written:

Notes from an 1891 interview with William Manning Vaughan (1807-1891), grandson to Benjamin and Sarah Manning Vaughan, concerning recollections of his life and the Vaughan Homestead of his youth.

The garden consisted of almost two acres with a fence all around it. There is no fence now. The garden was kept in cultivation by the spade, employing two men all the summer. In the part nearest to the house my aunts [Sarah (1784-1847), Lucy (1788-1854), Elizabeth (1791-1885)] had their flower garden full of all the old fashioned flowers. Foxglove, narcissus, and quantities of roses, among which was the York and Lancaster rose, a red and white rose, showing the colors of the contending houses . . . My grandmother [Sarah Manning Vaughan] used to raise all her own herbs, among which were peppermint, mint, chamomile, etc., which she used to take to the sick. She had a room in which she used to dry them, one side being fitted up with drawers and boxes. She used also to raise seeds and vegetables, and see to the giving away of the same, among which were flower roots and seeds.

While these descriptions tell us much about his garden, specific details such as species of trees and flowers or intentional philosophical garden design are still missing.

Our next step is to search Benjamin’s papers that now live in other places, including the American Philosophical Society in Philadelphia, the Massachusetts Historical Society in Boston or Bowdoin College in Brunswick. We can only hope that he kept records or discussed or sketched his garden in the many letters that he wrote. Only time and research will tell.

Stay tuned to the newsletter for the continuation of this “history mystery” as the “The Search for Benjamin’s Garden” unfolds.