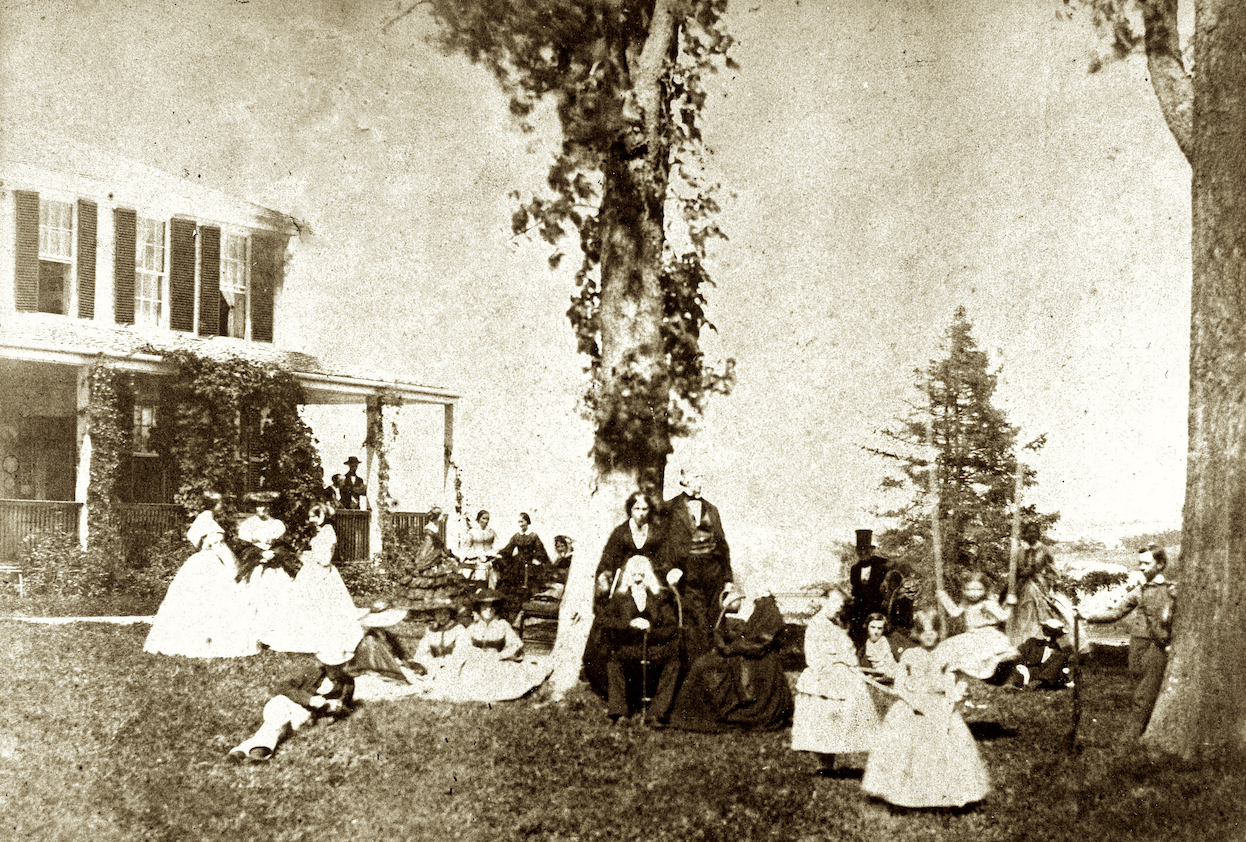 Picture above: Vaughan and Merrick family portrait c. 1860. The bearded gentleman in the center of the photograph is John Merrick who immigrated to America with the Vaughans in 1797 as their tutor. He later married Benjamin Vaughan’s sister. This is the earliest known photograph of the Homestead.

Settled in 1794, Vaughan Homestead of Hallowell was home to seven generations of the Vaughan family.

In 1797, Benjamin Vaughan, a former member of British Parliament, moved into a home on the banks of the Kennebec River. The house was built by his brother Charles who had to come to Hallowell to manage the land that had come to their family through their mother, Sarah Hallowell Vaughan. The house, while spacious and elegant by the standards of early Hallowell, was likely shockingly rustic for a family of wealthy London merchants. However, for Benjamin, who had narrowly escaped the guillotine in Europe for his “radical” political beliefs, the Homestead was a peaceful refuge, so he settled in and began his family’s love affair with the house and grounds that lasted for seven generations.

Benjamin Vaughan was a prodigiously curious man. His library of 10,000 books was reportedly second in size only to that of Harvard. He imported many fruit trees and livestock for experimentation in this new land and climate. One of the apple trees, a Black Oxford, still anchors a corner of the original garden. Benjamin’s curiosity was not limited though to agriculture. He corresponded with the leading thinkers of his time, men such as Benjamin Franklin, George Washington, Thomas Jefferson and Joseph Priestley, about many subjects including medicine, politics, and philosophy.

For the next 200 years, Benjamin’s descendants lived in this house on the hill, grew their food, made repairs, built trails in the woods, weathered the bad times and celebrated the good. In the summer, local children swam in Cascade Pond. In the winter, men cut its ice for the region’s ice boxes. The landscape changed as landscapes do; old trees died and fell, new trees were planted or grew on their own. Fences were put up and dismantled. Children moved away and came back.

In 2002, the 501 (c) (3) non-profit Vaughan Homestead Foundation was established by the family, and a new era in Homestead history began. In 2015 the organization’s name was changed to Vaughan Woods & Historic Homestead. VWHH owns and manages both the Homestead and the adjacent Vaughan Woods, a 197-acre nature preserve.

Learn about our project to update this version of history with information about the Vaughan family’s history as owners of slave labor plantations in the West Indies. Updates to this page coming soon!