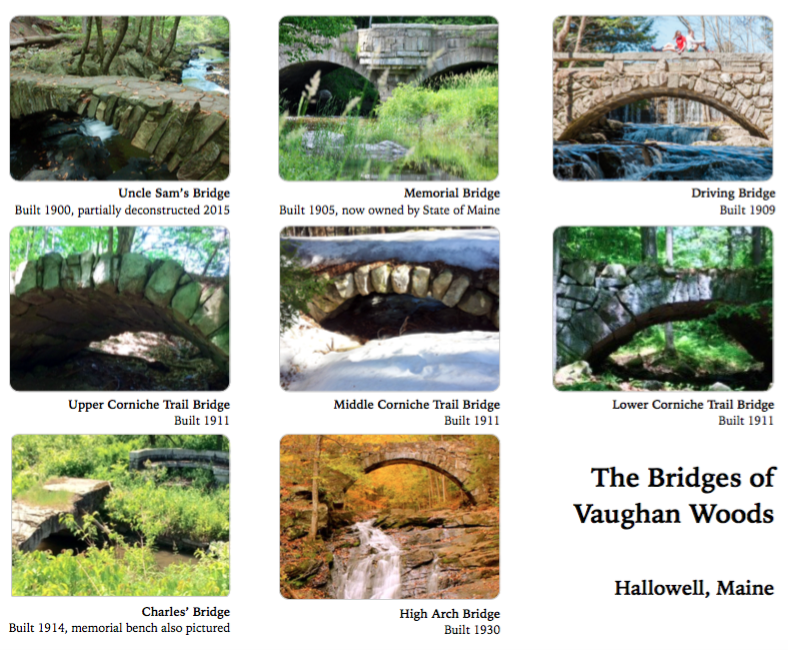 When William Warren Vaughan dreamed of restoring the woods adjacent to his family’s 1794 historic home after they had been ravaged by industry, he envisioned a magical and wild place to be enjoyed by future generations. Thus, between 1890 and 1930 he and his brother Benjamin worked tirelessly to purchase the land and, utilizing local labor, deconstruct the mills and create a nature preserve featuring three miles of trails and the stone bridges that today not only provide a way across the stream but also necessary structure to the preserve’s main trail, which hugs a steep hillside.

For over 100 years the family maintained the trails and bridges and allowed public access. Today Vaughan Woods attracts hundreds of  visitors each day and is frequented by both painters and photographers. Known locally as “Hobbitland” the Woods have provided magical childhood memories for many generations of area residents, some of whom fondly remember playing there as early as the 1940s.

In 2002 William Vaughan’s granddaughter, Diana Vaughan Gibson (pictured here playing as a child), transferred ownership of the Woods and Homestead to the 501(c)(3) non-profit organization now known as Vaughan Woods & Historic Homestead. VWHH’s goal is to maintain the Homestead and Woods as a public resource. In 2014 stonemasons Jon Jennings and Dan Ucci identified critical needs for structural repairs to the bridges, which have been seriously weakened by stream erosion, embankment instability, shifting abutments and/or disintegration of masonry. Visitor safety has required deconstructing one bridge and closing another. The entire project is projected to cost upwards of $500,000.

The bridges were recently chosen for the  Maine’s Most Endangered Historic Places list by Maine Preservation, and the organization has undertaken a multi-year long term process to restore them.

In 2017, VWHH was awarded $10,000 from the Elsie Viles Foundation and $5,000 from the Bangor Savings Bank Foundation toward the first phase of repairs to the 1930 Arch Bridge, for the northern abutment. Additionally, the community contributed over $25,000. In 2018 VWHH was awarded a $117,000 Recreational Trails Program grant through the Maine Department of Agriculture & Forestry and the Bureau of Public Parks & Lands to reconstruct 580 feet of steep trail, repair the southern abutment of the bridge, and build a stone staircase for access to the brook. This phase of the project was completed in 2020. Next, VWHH is working to raise funds toward work on the Coriche Trail  Bridges,  pictured in the middle row above.

Donate to this Project Now